According to the United Nations Development Programme (UNDP), impacts of climate change – such as increased droughts or more erratic storms – threaten to undermine decades of development gains and put at risk efforts to eradicate poverty.

Therefore, it is important that Solomon Islanders understand how climate change will affect different parts of the country, so that they can begin to plan for the future and so that the government is able to put in place strategies and plans to ensure continued sustainable development in the country.

In Solomon Islands, some of the impacts of climate change include: 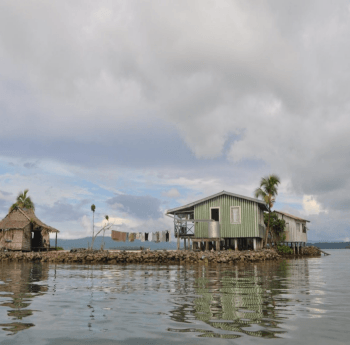 According to reports, scientists predict that sea levels in the country will rise by as much as 1 meter by 2100, increasing the level of risks to low lying coastal communities throughout the country. Some of these risks include increased coastal erosion due to the rising sea levels as currently being experienced in areas such as Ontong Java, Roviana Lagoon and the Reef Islands in Temotu Province.
The rising sea levels also expose these communities to other risks such as coastal salt water intrusion, which is a serious problem for coral atolls and which leads to decreased levels of fresh water supplies and increased risks to communities’ food gardens and food security in general.

A hotter weather, when combined with other climate change impacts such as increasing rainfall and increased pests and diseases, will all affect food security if nothing is done to adapt to or mitigate their combined effects. Additionally, increasing sea surface temperatures, rising sea levels and damage from tropical cyclones will affect the health of coral reefs and other marine ecosystems.

Rising temperatures may also lead to the increased likelihood of more intense and longer periods of rainfall, leading to an increased risk of flooding.

The likelihood of tropical cyclones developing may also increase along with increased storms and general bad weather out in the ocean, leading to increased risks to sea farers.

On land, risks due to these changes may include risks to human lives, properties, infrastructure damage, diseases and risks to certain economic activities such as tourism.

Internationally, world bodies and agencies such as the UNDP are working to help countries address the challenges of climate change. The UNDP remains the largest service provider in the UN system on climate change adaptation and mitigation.

The development programme, along with its regional partners such as the South Pacific Regional Environment Programme (SPREP) are supporting countries such as Solomon Islands to transition toward low-emission and climate-resilient sustainable development, while helping them to prepare for and build resilience to the impacts of climate change, and pursue low carbon development pathways that guarantee a cleaner, greener future and that are in line with the United Nations Sustainable Development Goals (SDGs).

Climate resilience is the capacity for a socio-ecological system to:

Vulnerability is an essential component of the climate resilience discussion because people that are the most likely to experience the majority of negative impacts of climate change are those that are least capable of developing robust and comprehensive climate resiliency infrastructure and response systems.

However what exactly constitutes a vulnerable community is still open to debate. The International Panel on Climate Change (IPCCC) has defined vulnerability using three characteristics: the “adaptive capacity, sensitivity, and exposure” to the effects of climate change. The adaptive capacity refers to a community’s capacity to create resiliency infrastructure, while the sensitivity and exposure elements are both tied to economic and geographic elements that vary widely in differing communities. There are, however, many commonalities between vulnerable communities.

At its basic level, a community that is economically vulnerable is one that is ill prepared for the effects of climate change because it lacks the needed financial resources. Preparing a climate resilient society will require huge investments in infrastructure, city planning, engineering sustainable energy sources, and preparedness systems. From a global perspective, it is more likely that people living at or below poverty will be affected the most by climate change and are thus the most vulnerable, because they will have the least amount of resource dollars to invest in resiliency infrastructure. They will also have the least amount of resource dollars for cleanup efforts after more frequently occurring natural climate change related disasters.

A second definition of vulnerability relates to geographic vulnerability. The most geographically vulnerable locations to climate change are those that will be impacted by side effects of natural hazards, such as rising sea levels and by dramatic changes in ecosystem services, including access to food. Island nations are usually noted as more vulnerable but communities that rely heavily on a sustenance based lifestyle are also at greater risk.

Roger E. Kasperson and Jeanne X. Kasperson of the Stockholm Environmental Institute compiled a list of vulnerable communities as having one or more of these characteristics.