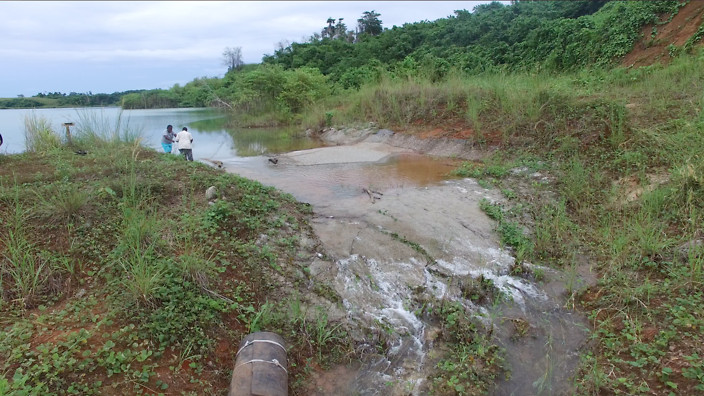 SBS - Tens of millions of litres of water has escaped from a toxic gold mine tailings dam in the Solomon Islands declared a 'disaster zone' by the government last year.

Eight-thousand people live downstream from what was, until two years ago, the country’s largest mining operation.

The shutdown Gold Ridge mine was sold last year by an Australian company to local mine site landowners for $100.

Scientists and villagers fear an environmental disaster is looming.

“We are panicking, honestly we are panicking, we don't know what is happening. Woman, pikinini, everyone of us (is) upset,” downstream community leader John Keara told SBS World News.

“The government didn't do anything for us. They ignore it, they ignore us. Now we become victims already.”

Tens of millions of litres of water escaped from the dam, that contains arsenic and cyanide and heavy metals in its sediment.

“At the moment there’s really no way to stop the spill way. The spillway was put in to relieve pressure and reduce the risk (of a dam collapse),” said Dr Gavin Mudd, an environmental engineer from Monash University.

“That's the way it's supposed to work but the issue though is it's not the end scenario you want, untreated tailings water getting out into the environment.

“There is an arsenic issue in the water with processing ore, it comes from the gold ore. Other heavy metals include selenium, mercury is often a very important one, and range of other heavy metals like copper and zinc.

“We need to make sure we are monitoring all of those downstream.”

Australian Federal Police were deployed to protect the mine from looters, but the water treatment plant and dam pumps were already damaged.

The Solomon Islands government would not allow St Barbara to release untreated water from the tailings dam.

A frustrated St Barbara last year sold the mine, and all legal liability, to local landowner company Gold Ridge Community Investment Limited (GCIL) for $100, with the government’s consent.

“St Barbara completed its commitments relating to the sale of the Gold Ridge project in November 2015 and has no remaining obligations in relation to the mine,” the company said in a statement.

As a condition of the sale, St Barbara last November installed a new water treatment plant and pumps to dewater the dam but they were only turned on last month.

“So far we’ve discharged over 200,000 cubic litres of water and the water has almost stopped discharging from the spillway,” said Walton Naezon, chairman of GCIL.

The uncontrolled flow over the spillway is estimated at another 100,000 cubic litres of water.

“We sent the samples down to Australia and we rule out cyanide, and almost ten different results that came back, it was low. The arsenic was a bit high,” he said of tests conducted more than a year ago.

After the sale last year, the Solomon Islands government declared the Gold Ridge mine a “disaster zone”.

“You can certainly point fingers at everyone in some capacity and at the end of the day. The environmental risks have not been taken seriously by all parties involved,” said Dr Mudd.

“That's government, the mining companies and the communities have underestimated it.”

Water samples taken from the tailings dam and downstream this week are due to be tested at the University of Queensland but that will not stop the spill.

“All downstream communities are advised to immediately STOP using the Kwara, Tinahula and Matepono rivers until advised by MHMS (Ministry of Health and Medical Services) and the World Health Organisation that it is safe to do so.

"Do NOT use river water for drinking, washing, bathing/swimming or fishing".

The Ministry of Health has not responded to an SBS enquiry about the unreleased statement or what action they have taken to inform downstream communities.

“We asked them not to use the water, even though the water is clear,” said Walton Naezon, chairman of GCIL.