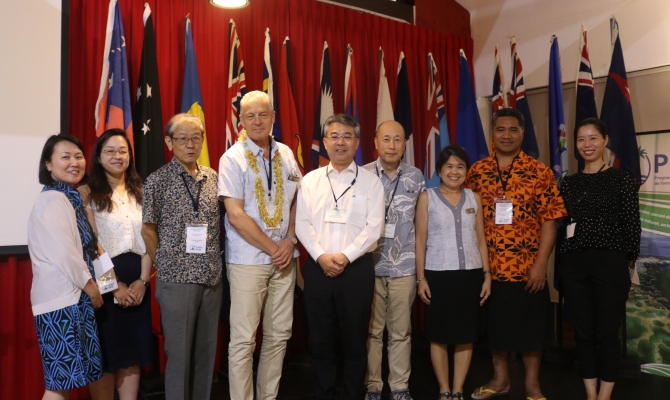 4 September, 2019, Apia, Samoa – Unmanaged disaster waste can negatively impact the recovery efforts of countries affected by natural hazards. This was the key message expressed at a special side event held last night, where the draft Regional Disaster Waste Management Guidelines were presented to Pacific island delegates and officials at the Secretariat of the Pacific Regional Environment Programme (SPREP)’s 29th Meeting of Officials which opened in Apia.

Pacific island countries have recorded overwhelming amounts of disaster waste generated during natural hazards, which experts say can be as much as ten times the average waste generated under routine conditions. The draft regional guidelines are based on past experiences and lessons learned from a number of past Disaster Waste Management pilot projects during JPRISM I (2011 – 2016) in Fiji, Samoa, Tonga, Vanuatu and Solomon Islands. In addition, two sub-regional consultations were conducted in Samoa (Oct 2018) and Palau (Feb 2019), which senior officials from Disaster Management Organizations attended to share their experiences in line with the usual Disaster Management Plans in Pacific Island Countries. This is important in aligning waste management principles and disaster management cycles, which form the basis of existing national waste and disaster management plans in Pacific islands.

Compiled by the Japanese Technical Cooperation Project for Promotion of Regional Initiative on Solid Waste Management in Pacific Island Countries Phase II (J-PRISM II) in collaboration with SPREP, the guidelines are a first for the Pacific region, and will help to inform National Disaster Management Offices (DMO) on measures to take before, during and after a disaster event.

The guidelines focus on the operational aspects on what to do before and after a natural disaster. One of the important arrangements highlighted is to make appropriate arrangements in-country with the local recyclers for the recovery of recyclable waste as well as existing road maintenance and rubbish collection contractors to assist with the rapid management of waste.

Delivering the opening remarks for the event, Mr Roger Cornforth, Deputy Director General of SPREP, touched on the importance of the collaborative effort needed to respond to challenges such as disaster waste management in the Pacific.

“Countries are not set up to deal with these huge amounts of wastes including disaster hazardous wastes such as asbestos, household chemicals and other toxic substances,” said Mr Cornforth.

“Getting the waste to facilities during disaster events can result in mixed solid and hazardous wastes being dumped and leading to contamination of the environment and providing breeding grounds for disease outbreaks. This is why partnerships such as that between JICA, through JPRISM II, and SPREP are critical in addressing the ability of Pacific island countries to become resilient to climate change.”

The side event was also an opportunity at the regional level to showcase and consult all SPREP Member Countries on the draft Regional Disaster Waste Management Guideline. Previously, two separate sub-regional consultation workshops were held in October, 2018 in Samoa, and earlier this year in February in Palau where representatives of 10 Pacific island countries were involved.

Presenting the draft guidelines at the SPREP Meeting is a final regional consultation and the last opportunity to gather comments and feedback from Pacific islands.

Mr Faafetai Sagapolutele, Assistant Chief Advisor, J-PRISM II, who presented the draft guidelines to participants of the special side event summarised the key components and mechanisms of the Regional Disaster Waste Management Guidelines.

“The main issues and concerns of disaster waste in Pacific islands relate to the delay of emergency lifesaving operations caused by inaccessible roads, health impacts of chemicals and hazardous wastes, environment impacts, and economic impacts as waste generated during natural hazards often surpass what would normally be produced and collected if there was no emergency situation.”

Mr Sagapolutele stressed how Pacific islands are at the forefront of climate change, and are highly exposed to tropical cyclones, prone to flooding in coastal and low-lying areas, and stated the impact of unmanaged disaster waste is a significant one for the region.

Expressing his gratitude to JICA and J-PRISM II for the guidelines and the collaborative work being done in the region to address the challenges and issues Pacific islands face with disaster waste, Mr Cornforth announced another partnership between SPREP, J-PRISM and the University of Newcastle.

“I am pleased to announce that in order to further improve this guideline, SPREP, JPRISM II and the University of Newcastle are collaborating in a pilot to implement the actions in the guideline in one of our member countries. The pilot will build the capacity of the pilot country and subsequently expand this capacity building throughout the region for training in handling of disaster waste management.”

“Please join me in thanking JICA, through the JPRISM II project, for collaborating with SPREP and supporting the region to deal with disaster waste.”

The guidelines will be launched in 2020 at the Clean Pacific Roundtable.

J-PRISM II is a five year multi-million-dollar project funded by the Japan International Cooperation Agency (JICA) in partnership with SPREP and commenced in 2017 following the success of the first phase of the project. The goal of the project is to assist in the sustainable management of solid waste in the Pacific region.

The 29th SPREP Meeting of Officials is being held at the Tanoa Tusitala Hotel in Apia, Samoa from 3 - 6 September. The Meeting will bring together SPREP’s 21 Pacific island Members countries and five metropolitan Members to discuss strategic issues pertaining to the organisation, and to approve the 2020-2021 work plan. The Environment Ministers’ High-Level Talanoa will be held on Friday 6 September.

The five metropolitan members of SPREP are: Australia, France, New Zealand, United Kingdom and the United States of America.