81% of the world’s largest earthquakes occur at the edge of the Pacifi c, which is known as the “Pacifi c Ring of Fire” because it is renowned for earthquakes, volcanic eruptions and tsunamis. These hazards are caused by the movement of the Earth’s tectonic plates, especially when one plate is dragged under another at what is known as a convergent margin.

What is an Earthquake?

As plates collide and grind over or past each other, stress builds up locally within the rock until the rock breaks along lines of weakness (faults). An earthquake is the vibration of the earth due to the energy released as the rock breaks. Additionally some earthquakes can be caused by volcanic activity or underground collapse.

Both shallow (0-70 km deep) and deep (down to 700 km) earthquakes are associated with oceanic subduction zones such as the Tonga trench connecting New Zealand, Tonga and Samoa and the New Hebrides trench, which connects Vanuatu, Solomon Islands and Papua New Guinea. Regionally, these countries and Fiji are at greatest risk from earthquakes. 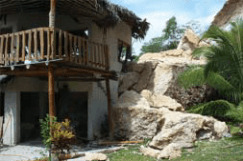 Earthquakes, both deep and shallow, can release huge amounts of energy and so can be extremely damaging to Pacific island countries.

Is caused by energy waves, known as seismic waves, hitting the surface of the earth.

They cause the ground to shake up and down, back and forth and from side to side. This causes damage to buildings, roads, dams and reservoirs, buried pipelines, infrastructure, and overhead cables, leading to dangers from collapsing buildings, falling debris, uneven ground, landslides, flooding and fires.

Ground shaking occurs at different intensities according to distance from and magnitude of the earthquake. The larger and shallower the earthquake and the closer to the centre of it you are, the more intense the ground shaking.

Is where an earthquake causes the ground surface to permanently split apart along a fault within the ground rock and soil. Faulting tends to occur when the earthquake is very shallow (0-10 km deep) and strong.

Is where the vibrations of the ground cause the soil to behave like a liquid. It happens on mainly sand and mud/clay soils – the soil fl ows, acting like quicksand, and results in failure of building foundations. It is an especially dangerous effect in urban areas.