Globally, landslides are more widespread than any other geological event and cause thousands of deaths and injuries each year and can cost billions in damages.

What is a Landslide?

Landslides occur when rock, soil or waste becomes unstable and moves downward under the influence of gravity. Many factors contribute to the instability of slopes, but the main factors that pre-dispose a slope’s stability are its geology, its geometry and its (pore)-water conditions. 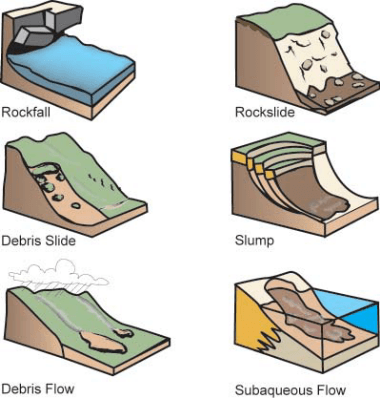 Landslides travel at a variety of speeds from a few millimeters a year to over 100 metres per second and are frequently associated with other natural hazards. Natural events and human activity can also cause slope failures.

Landslides can be fast, sudden and can cover large areas, engulfing people, crops, animals and buildings. Areas prone to landslide hazards include old landslides, slopes dried out and cleared by fire, the bases of steep slopes, drainage channels and developed hillsides.

Landslides cause tremendous damage to property and infrastructure, as well as numerous fatalities and injuries.

One of the major problems is that landslides can cut off roads and communication lines, leaving people stranded. Landslides also affect the viability of food gardens and cash cropping areas on which rural Pacific economies are heavily dependent.

Secondary Effects Alteration of the landscape

Very large landslides can have an enormous effect on the surrounding geography. They create huge gaps in the vista and dam rivers, flooding surrounding areas and creating lakes.

Failure of a landslide dam, which has trapped large volumes of water behind it, can cause catastrophic flooding downstream.

Large landslides underwater or into the sea may create tsunamis.

Landslides cause severe soil erosion and deposit this sediment in rivers, which then carry it into the sea causing considerable damage to the surrounding coral reefs.