Tropical cyclones (also known as typhoons or hurricanes) affect nearly all Pacifi c island countries and are the most frequent hazard to affect the region, with around 7- 8 cyclones occurring every year. As a result of climate change cyclone frequency has doubled in the last decade. 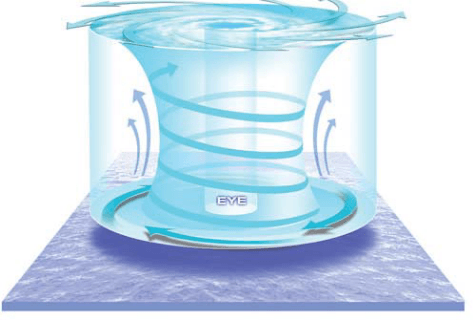 What is a Tropical Cyclone?

A tropical cyclone is a violent rotating windstorm that develops over warm tropical waters warmer than 26.5 ºC and located between 5º and 15º latitude. Cyclones begin as thunderstorms, which due to the Earth’s spin revolve clockwise in the southern hemisphere and anticlockwise in the northern hemisphere. These storms rise up to 10 km into the atmosphere and can be up to 2000 km across. As the cyclone becomes organised, a calm clear area called the ‘eye’ forms at its centre. The eye is typically 10-50 km wide and is surrounded by a dense ring of cloud known as the eye wall, which marks the belt of strongest winds. Tropical cyclones can persist for many days and follow unpredictable paths, however in the South Pacific they usually move southeast. The warmth of the tropical waters provides the energy to fuel cyclones. As a result, they tend to weaken and dissipate as they move over significant island landmasses or cooler waters further south, forming rain depressions.

There is a well established network of cyclone warning centres throughout the region. Places like the Regional Specialised Meteorological Centre (RSMC) in Nadi monitor, track and name tropical cyclones as well as provide warning services to Pacifi c island countries. Similar services are provided for Papua New Guinea and Solomon Islands by the Australian Bureau of Meteorology’s Tropical Cyclone Warning Centres. French-speaking countries are looked after by Meteo-France and American affiliated states by the National Oceanic Atmospheric Administration (NOAA).

Strong winds can continue for hours, days even, causing widespread damage to buildings, infrastructure and vegetation and causing loss of life. Wind speed levels of a tropical cyclone are:

Torrential rains can result in widespread flash flooding and river flooding. Up to 600 mm and more of high intensity rain can be produced in one day. These rains can also trigger landslides in hilly areas, which may already be sodden due to previous rains.

Storm surges and waves created by low atmospheric pressure and strong cyclonic winds blowing over long distances. A storm surge is a raised dome of seawater about 60-80 km wide and 2-5 m higher than normal sea level. As the cyclone makes landfall, storm surge and waves inundate coastal areas. At the coast, storm surge and waves are the greatest threat to life and property and also cause severe coastal erosion. In low-lying atolls, a surge may inundate the whole island.

Further Saltspray and Lightning can cause considerable damage to crops, forests and infrastructure.